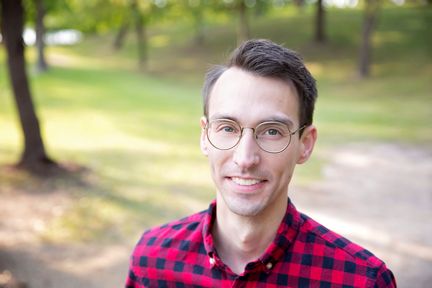 About the Torah Scroll

The Torah scroll at the University of Northwestern is on permanent display near the entrance of the Berntsen Library. Viewing is free and open to the public. Please read the Viewing & Handling policies, and ask the Librarian at the Reference Desk for access to the display room. If you'd like to study the scroll in more detail, please contact the Archivist for arrangements. Other requests will also be considered.

The Torah scroll was the generous gift of Ken and Barbara Larson for the enjoyment and study of the UNW community.

When the Torah scroll is unrolled it measures 89.3 feet long. It is composed of 43 panels of parchment--a writing surface usually made from the hides of sheep or goats. These panels are sewn together and each contain three to five columns of text. The Hebrew text is decorated with what look like small crowns on some of the letters known as tagin (תָּגִין). Many of the letters also have an elongated top bar which was initially meant to complete a line of text in order to make it even with the others. In this scroll, it seems that the scribes elongated some letters to enhance the aesthetic of some passages.

The Hebrew scriptures--what Christians call the Old Testament--are divided into three sections: the Torah, the Prophets, and the Writings. The Torah, in this sense, is synonymous with the Pentateuch (i.e., the first five books of the Old Testament). With the exception of Genesis, the torah (תורה)--i.e., the "teaching" or "instruction" delivered to Moses--dominates the narrative of God's covenant with Israel found in Exodus through Deuteronomy. Thus, the appellation The Torah (התורה) naturally became the designated term to refer to this grouping of books. The Torah and its physical format on a scroll became a central feature in Jewish ritual and tradition after the destruction of the Second Temple in 70 CE, and its importance continues in Jewish communities today.

The Torah scroll at the University of Northwestern most likely originated in Eastern Europe but could perhaps have come from as far west as Germany sometime during the 18th century. It was probably produced by a rural community of Ashkenazi Jews of little means. The scroll would have been used in the ritual readings of the community synagogue until it became "unfit" (pasul) for ritual use. Migrations of Ashkenazi Jews from Europe to what is now Israel occurred in the 19th and 20th centuries, and it is probable that the scroll found its way to Jerusalem by these immigrating Jews. If the immigrants took the scroll to Israel after the Second World War, it would have survived the Holocaust in Europe. But unfortunately, the travels of the scroll remain speculative, and beyond these broad probabilities and possibilities its story is hidden.